Even though most people consider that e-cigarettes are much safer alternative to regular smoking, you should have in mind that they come with wide array of side effects.

Vaporizers, or e-cigarettes, use batteries to heat the mixture of flavoring, nicotine and liquid base such as glycerol or propylene glycol and make it into a vapor that you should inhale and get the same effects as smoking but without harmful smoke and other chemicals involved in combustion.

They entered the market in early 2000s, and since the beginning, the main selling point was a safe alternative to smoking cigarettes because it lacks burning and smoking and satisfies the need for nicotine.

However, according to recent researches, e-cigarette smokers face health problems too. FDA, for examples, created a comprehensive regulation of tobacco products to include e-cigarettes. They made strict control on which substances enter the liquid and how to keep them out of the minor’s hands.

You should check best e cigarette reviews to find out which one is the best for your specific needs. However, even with regulations that you have seen above, abusing e-cigarettes could cause severe health complications.

Even though, e-cigarettes lack tobacco and other chemicals that combustion makes while smoking and inhaling, they still feature lots of nicotine, which could cause heart-related issues similar as regular cigarettes.

Michael Fiore, director of Center of Tobacco Research and Innovation stated that nicotine is a stimulant drug, which will lead your heart to beat faster than usual and cause high blood pressure too.

Formaldehyde that we can find in some e-cigarettes can cause cancer but in addition, it can also irritate your nose, throat and eyes.

Researches stated also that propylene glycol could also cause irritation to respiratory track and eyes, and eventually cause significant harm to your spleen and central nervous system.

Dr. Fiore stated that nicotine that you will find in e-cigarettes could cause dizziness, nausea and vomiting, especially if you are a new user. Therefore, you should find appropriate liquid that will match your preferences and taste.

Similar as regular and standard cigarettes, the nicotine inside e-cigarettes can cause a release of dopamine throughout the body, which will ultimately lead to addiction. This is the same as smoking regular cigarettes, because nicotine is psychoactive part of tobacco, which is highly addictive.

It does not matter if you are old or young, because it will rapidly take over and make substantial changed in your brain chemistry. Dopamine is the agents that cause cigarette addiction, because when released it creates pleasurable and soothing sensation that you will start to crave afterward.

Check this website: https://en.wikipedia.org/wiki/Dopamine to find out more on dopamine and its effects on overall health. 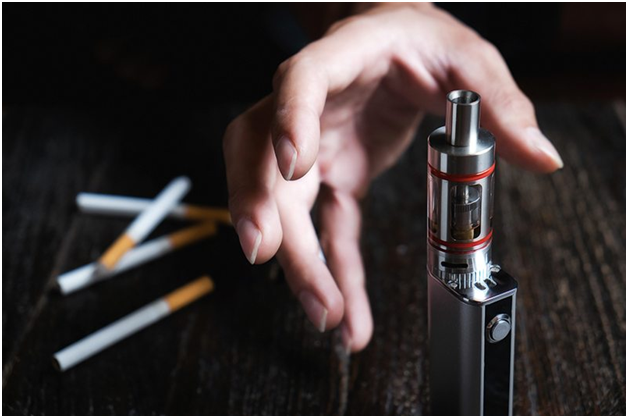 Similar as any other drug, consuming of too much nicotine is toxic and can cause severe problems if taken too much. If you swallow concentrated nicotine in a form of liquid, you will be able to overdose without any additional problem.

You should avoid leaving e-cigarettes in children’s reach because liquid is highly toxic and children do not understand these risks. Most children that ingested liquid or juice got very sick and some of them eve died from it.

Therefore, if you choose to use e-cigarettes, you should keep it locked away and hidden to avoid making a tragic mistake.

In 2014, more than 13% of high school students admitted that they used e-cigarettes. The main problem that arrived with existence of e-cigarette is to how to reduce the abuse by teen and first time nicotine users.

Children and teens that got their hands on these devices could face severe long-term brain development issues due to high levels of nicotine. Consuming nicotine before adolescence can worsen your attention and memory and increase chances of developing behavioral and mental problems such as panic disorder, depressive disorder and personality disorder.